It was a Eureka! Moment.  I was leading a WHISKeY and Cocktail tasting to raise money for the College of Piping and Celtic Performing Arts of Canada.

I gave a 15 minute presentation on the world of WHISKeY and COCKTAILS.  Immediately a 50 something male came to me and said, “Thank you for not making me feel stupid. I want to learn about whiskey – but feel very intimidated.” 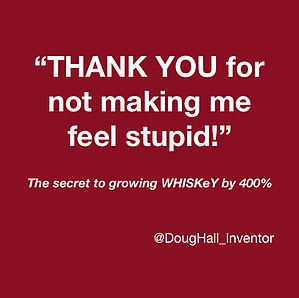 I felt both guilty & excited. GUILTY that 70% of my presentation was focused on whiskey lovers.  I felt EXCITED because while WHISKeY is a big industry it has low penetration (just 18% over the past 12 months).

Suddenly I realized that the industry, and me included are saying and doing things that make it difficult for new customers to join the world of WHISKeY drinkers.

I tested my theory the next night by focusing on inclusiveness. I addressed the myth that WHISKeY must be drank “neat” explaining it was just 10% of consumption. I explained that cocktails are over 50% of consumption. I invited them to come to my tasting table where I would customize a whiskey and cocktail (% alcohol & sugar level) for them.

It worked new whiskey lovers were created. Whiskey lovers thanked me for the education AND for helping their partners find a whiskey & cocktail they love.